Place, Manner, and Voicing of the American English Consonants

In a previous video, I talked about the International Phonetic Alphabet for Consonants. If you haven’t seen it, I’d suggest that you watch that video first before you watch this one.

As a quick review, the IPA is organized into three areas: Place, Manner, and Voicing, and today I want to go more in depth with each of these areas and discuss the consonants that fall into each category.

Take a look at the IPA chart  to see how it is organized. 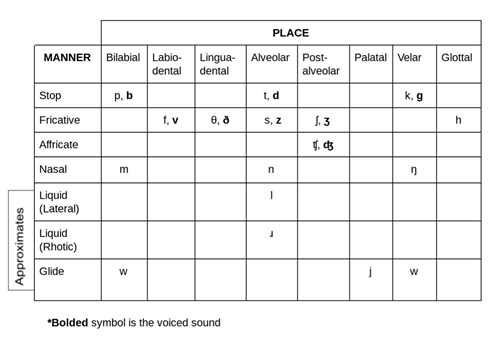 Place refers to where that sound is made. You’ll see that American English has 8 places where sounds are made, starting with bilabial and ending with glottal. These places correspond to a location in the mouth or throat, so a bilabial is made at the front of the mouth, and a glottal is made back in the throat. So you can think of these places as moving from front to back.

Let’s review each one:

Bilabial means both lips. English has 4 bilabials: P /p/, B /b/, M /m/, and W /w/. These sounds are all made with both lips - that is the place of articulation.

Labio-dental means lip to teeth. English has two labio-dental sounds: the F /f/ and V /v/. To make these sounds, you bring your lower lip up to your upper teeth - so labio - dental.

Lingua-dental means tongue to teeth. English has 2 lingua-dental sounds: the TH sounds /θ, ð/. To make these sounds, you place your tongue between your teeth.

Alveolar refers to the bumpy ridge just behind your front teeth on the roof of your mouth. This is where the tongue either touches or comes close to touching when the sound is made. The Alveolar ridge is a popular place of articulation! English has 7 alveolar sounds: T /t/, D /d/, S /s/, Z /z/, N /n/, L /l/, and R /ɹ/.

Post-alveolar means the tongue is behind the alveolar ridge when you make these sounds. English has 4 post-alveolar sounds: SH /ʃ/, ZH /ʒ/, CH /ʧ/, and J /ʤ/.

Palatal means the tongue goes to the middle part of the  roof of the mouth when you make this sound. English has one palatal sound: Y /j/.

Velar refers to the back of the mouth - or the soft part of the roof of the mouth - and that is where the tongue goes when you make these sounds. English has 4 velar sounds: K /k/, G /g/, NG /ŋ/, and W /w/ (W /w/ is considered both a bilabial and a velar sound).

And lastly is glottal. Glottal refers to the vocal cords, which are in your throat. The tongue doesn’t help with articulating this sound - instead it’s the vocal cords that make the sound. English has one glottal sound: H /h/.

The next area is called manner, which is how the air is released for each sound. Let’s go back to the IPA chart and review manner of articulation.

English has 6 manners of articulation - starting with Stops. Stops are made by stopping the airflow somewhere in the vocal tract, and then releasing a puff of air afterwards. English has 6 Stops: P /p/, B /b/, T /t/, D /d/, K /k/, and G /g/.

Affricates are a combination of a stop consonant and a fricative. English has two affricates: CH /ʧ/, and J /ʤ/.

Nasals are sounds in which the air flow passes through the nose instead of the mouth. English has 3 nasals: M /m/, N /n/, and NG /ŋ/.

Liquids are made when the tongue makes a partial closure in the mouth. English has two liquids: L /l/ and R /ɹ/.

And glides are similar to liquids in that the tongue and lips make a partial closure in the mouth, but with a glide there is movement in the sound between two places of articulation. English has 2 glides: W /w/ and Y /j/.

Now I’ll discuss the concept of voicing, which refers to vocal cord vibration. Here’s a quick experiment: Put your hands on your neck and say “ahhh!” You should feel a buzzy vibration - that is the vocal cords.

Let’s go back to the IPA chart to review voicing of consonants.

On this chart, you’ll see that there are pairs of symbols in the same box, like the P /p/ and B /b/ sounds. But only the B /b/ is bolded. That’s because the B /b/ is voiced - the vocal cords vibrate when you say this sound. B. But the P /p/ is a voiceless sound - no vocal cord vibration; just airflow. P.

Thank so much for watching, and let me know if you’d like help with place, manner, and voicing of American English consonants!