The International Phonetic Alphabet, or IPA, is a notation system that uses symbols to represent the sounds of spoken language. Each symbol corresponds to a distinct sound, and as long as you know the symbol-to-sound correspondence, you should be able to pronounce any word you encounter.

The IPA is incredibly helpful when learning how to speak a foreign language, and especially for those languages that are not phonetic, like English. This means that in English, you can’t rely on the spelling of the word to let you know how you should pronounce it - the letters don’t always correspond to the same sound.

English is Not a Phonetic Language

Let’s take the classic example of the words through, cough, and bough. All three words contain the “ough” spelling, but they are each pronounced differently. If you’ve never seen these words before, you may have no idea how to pronounce them, and you’d have to rely on another system to help you with pronunciation. That’s where the IPA comes in handy!

Here are the IPA transcriptions of these words (and listen to my recording to hear how to I say them):

Through: /θru/. The “ough” spelling makes an “uuu” sound. 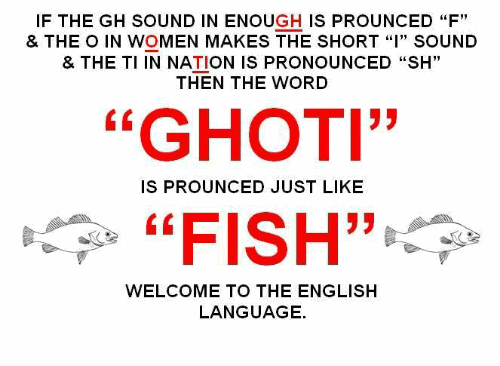 American English speakers also have difficulty with pronouncing (and spelling) unfamiliar words for this same reason. And where do they turn for help? The IPA and a dictionary!

So if you’re not already familiar with the IPA, hopefully this blog will convince you that you should be! It will make a huge difference in your ability to correctly pronounce any word you encounter (I promise!) 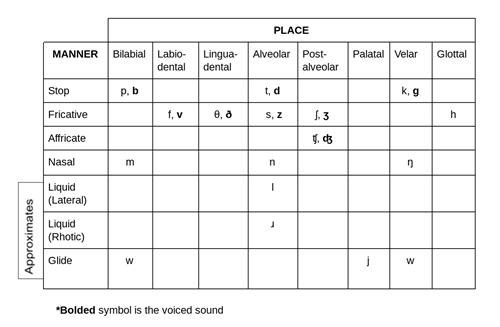 You'll notice the chart is arranged based on these three parameters: Place, Manner, and the bolded symbols that show Voicing. In order to fully understand how to pronounce the sounds of American English using the IPA chart, it will be helpful for you to also learn what those three parameters mean.

Place refers to the place in the mouth where the sound is made. So a sound that is a bilabial, like /p/, is made with both of the lips (bi = both, labial = lips). Watch yourself in the mirror when you say the word “please”, and you’ll notice that your lips come together when you pronounce the /p/ sound.

Here are the Places of articulation:

Alveolar: Tip of the tongue is touching the gum ridge behind your front teeth (this is called the Alveolar Ridge)

Post-alveolar: Tongue is touching behind the alveolar ridge (post = behind)

Palatal: Middle part of tongue up against the middle portion of the roof of the mouth

Velar: Back part of the tongue is touching the back portion of the roof of the mouth (also called the soft palate)

Glottal: Made at the vocal cords

Here are the Manners of production:

Stop: The airflow is stopped so that airflow ceases for a brief amount of time

Fricative: The airflow is pushed through a small opening, which creates turbulence to the airflow

Affricate: Begins as a stop (airflow ceases) and releases as a fricative (airflow is pushed through a small opening)

Nasal: Air escapes through the nose (air does not come out the mouth because there is complete closure somewhere within the mouth)

Approximate: Articulators approach each other but not narrowly enough to create turbulent airflow (as is seen with fricatives and affricates)

To understand the concept of vocal cord vibration, try this quick exercise. Place your hand on your throat and breathe. What do you feel? You should feel...nothing. While you’re breathing, your vocal cords are wide open, and air is just passing through unobstructed. Now keeping your hand on your throat, say the word he and hold out the first sound “hhhhh”. You should feel no vibration of your vocal cords - just the air is moving. This is the voiceless “h” sound, or /h/.

Now say the word he again, and as you keep your hand on your throat, hold out the vowel sound “eee” (/i/ in IPA). What do you feel this time? You should feel vibration or movement of your vocal cords. When a sound is made with the vocal cords vibrating, we call it a voiced sound. The word he has both a voiceless /h/ sound and a voiced /i/ sound.

Here are the consonants of American English listed by the IPA symbol and a target word. Listen to my recording below to hear me pronounce each of the words. And click here for a FREE, printable version of the American English Consonants.

Thanks for reading my blog! And let me know if you want more help with English pronunciation using the IPA chart.