If you’ve watched the video in my blog about the origin of American accents, you’ll know that there are many, many regional accents throughout the United States. And even within the same region, there are even more specific differences in pronunciation, vocabulary, and grammar (click here for an interesting article that discusses the differences in English throughout the U.S.).

Which American accent is considered to be the “standard”?

While there are many different regional accents within the U.S., some language scholars have used the umbrella term “General American English” to describe a style of American speech that may be considered a more typical or neutral form of speaking. It is the style of speaking used by most newscasters and television actors, and it is perceived as lacking any distinctly regional, ethnic, or socioeconomic characteristics (for example, the r-dropping found in New York and eastern New England). Some scholars also include the areas of the Western U.S. and Western New England as sharing many of the same pronunciations as General American English.

General American English is a debatable term, and some scholars reject it altogether because of the implication that there is a “best” or “superior” form of speech. It’s important to remember that we all speak with an accent, and all accents are natural and make us unique. I use the term in my blog simply to provide some context to compare what may be considered a more “typical” form of American English to other forms of English. 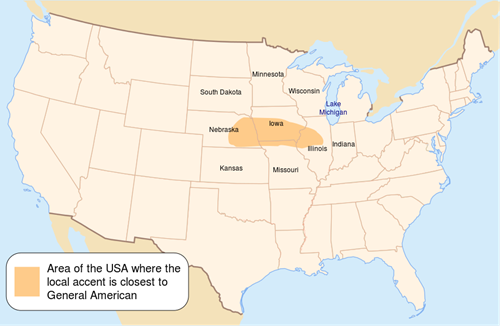 The orange represents the area that speaks "General American English".

What are the differences between all the American accents?

To illustrate some of the differences between the accents in the U.S., I’ll do a few quick comparisons between the way I speak compared to other parts of the country.

I was born and raised in northern California, so I speak with a Western U.S. accent. The Western accent is very similar to the General American English accent, and some linguists believe they are the same at this point.

One main feature of the Western accent (and sometimes in the General American English accent) is called the cot - caught merger. In some areas of the U.S., the word caught is pronounced with the /ɔ/ vowel, which is a low, back, rounded vowel. But in the Western U.S., the /ɔ/ vowel has merged with the /ɑ/ vowel, so that caught is pronounced as /kɑt/.

One artist's representation of the many accents found in the United States.

This means that in the Western U.S., words like dog, dawn, and caught are pronounced with the same vowel as not, rock, and cod.

Now listen to how someone from Connecticut might pronounce dawn and Don. Notice how he uses the /ɔ/ vowel for dawn and the /ɑ/ vowel for Don.

I’ll give you another example. Listen to the way I pronounce the vowel /a͡ɪ/, like in the word behind, transcribed as /bəˈ ha͡ɪnd/. I use the diphthong /a͡ɪ/ in the second syllable.

Now listen to a man from Tennessee pronounce the word behind. Listen carefully at the 0:09 mark - the sentence is, “If we ain’t got no traffic behind us”. In this part of the U.S., where the regional accent is considered an Inland/Mountain Southern accent, the diphthong /a͡ɪ/ is reduced to the monopthong /a/.

I have a regional accent - what can I do?

If you have an accent that is different from the Western U.S. or General American English accent and you want to adopt a speaking style that is more congruent with this region, working with an accent modification coach can help.

I offer a comprehensive accent modification program that will highlight your specific speaking patterns and provide in-depth instruction on the key features of the Western U.S. accent. The areas targeted during a program can vary, but typical targets include vowels, consonants, vocabulary that is specific to this region, grammatical differences, and nonverbal communication styles. Contact me for more information!