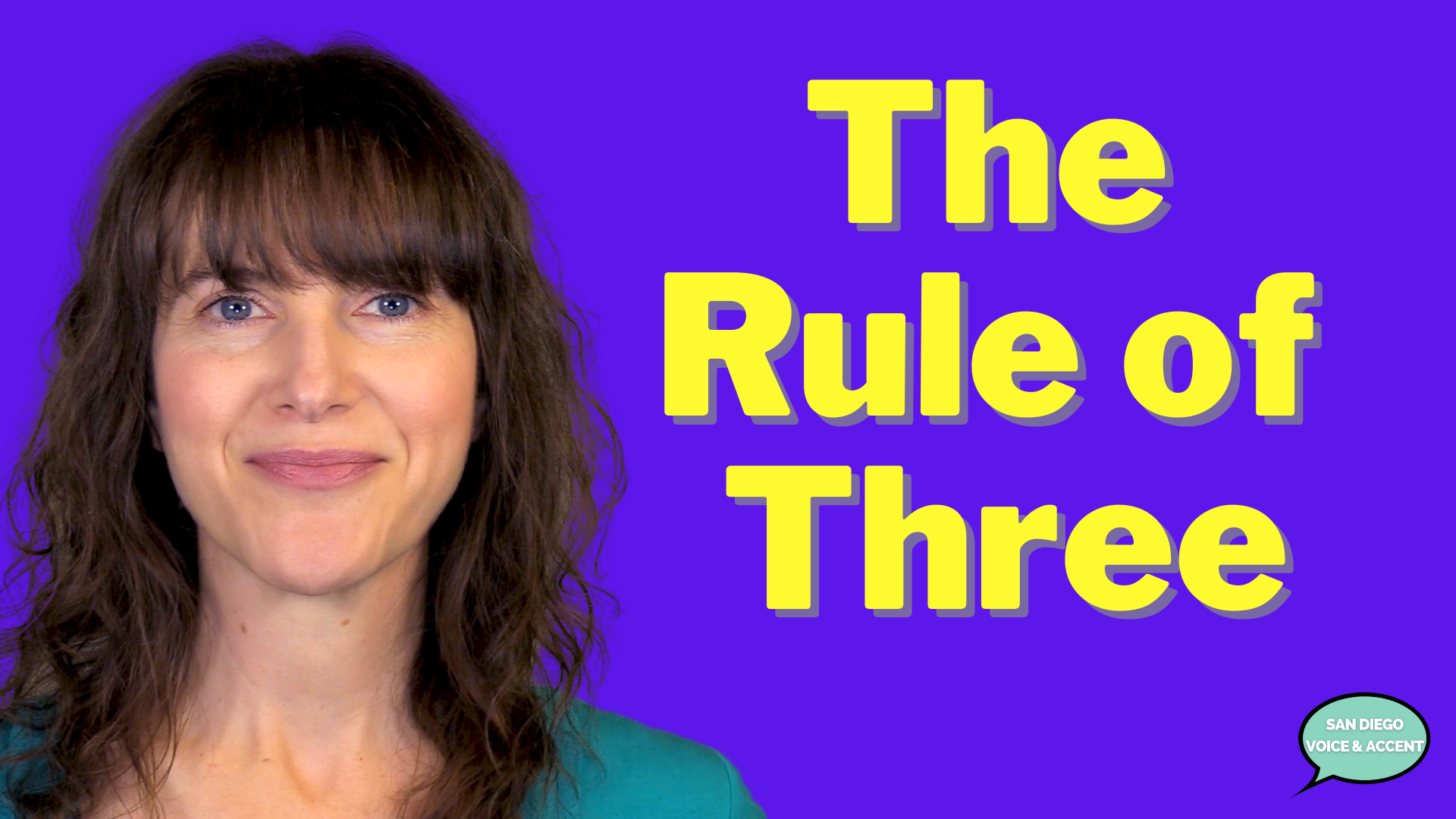 Have you ever wondered why native speakers of American English don't pronounce the "t" in "lastly"? Or in "Christmas"? Or in the phrase "first day"? It's because of the Rule of Three! The Rule of Three happens to other consonants as well, and it occurs both within words and across word boundaries when linking words together. Learn all about the Rule of Three in this video, and practice with me at the end!

Hi, I’m Julie with San Diego Voice and Accent, and in this video you’ll learn about the Rule of Three in American English.

Spoken English is different from written English in many ways. Unstressed syllables are often reduced, two words can combine into one word, like in a contraction, and sometimes sounds can disappear completely. That is what I’m going to talk about today - when a sound is dropped from a word.

Let’s look at a word like Christmas, and look carefully at the spelling while I pronounce it again. Christmas. Did you hear a T sound?

Nope, there is no T sound in the word Christmas, although the letter T is in the spelling.

Let’s look at another word, shifts, as in, “I’m scheduled for back to back shifts at work today”. Look at the spelling while I pronounce it again. Shifts. Did you hear a T sound? Shifts.

Nope, there is no T sound in the word shifts, although the letter T is in the spelling.

The Rule of Three: Elision

The words Christmas and shifts follow the Rule of Three: When three or more consonants are next to each other between vowels or after a vowel, the middle consonant is often dropped. It disappears completely, especially when it’s a voiceless stop consonant like the P, T, or K consonants. This process is called elision.

Native speakers use elision to help their speech sound more fluent and smooth. If I were to say shifts with the T sound, shifts, that takes extra time and you can hear a pause in the fluency of my speech when I pronounce the T.

Shifts is much faster, smoother, and more fluent.

Here’s an example. Look at this sentence, and pay attention to the words just and bought. How do you think those words should link together?

Is it like this: I just bought a car.

Or is it like this: I just bought a car.

The second option, just bought, is how those words link together. But why? The Rule of Three! The word just ends with two consonants, S and T. The word bought begins a consonant, B. In connected speech, those two words link together, and now you have 3 consonants in a row between vowels. The middle consonant is a voiceless T sound, and it disappears completely.

When elision occurs due the Rule of Three, it’s not always the middle consonant that is dropped. I’ll give you an example. In the phrase, attempt more tricks, the consonants M, P, T, and M line up next to each other in connected speech. Native speakers will typically drop the T in attempt, which makes this phrase sound like

There are a couple of additional things I’d like to add about the Rule of Three. Native speakers don’t always follow the Rule of Three, especially when they are speaking slowly or want to emphasize a particular word. For example, if I said “I just bought a car” but I wanted to emphasize that I bought the car only a short time ago, I might say it like this:

I just bought a car.

In this case, I might choose to pronounce each sound in the word just.

Another important thing to know about the Rule of Three is how it applies to words that end in an S sound, such as possessives, plurals, and the third person singular. Let’s take the word ghost, and I’m going to use it in this sentence:

The plural of ghost is ghosts, and you’ll notice that the plural form has three consonants in a row, the S, T, and S consonants. If we follow the Rule of Three, then the middle T can be dropped, which would make this sentence sounds like:

Sometimes, non-native speakers may try to drop the final S sound in a word, which would make this sentence sound like:

This would result in a grammar error - it should be five ghosts, with the plural S at the end. So when a word ends in an S, the final S sound should never be dropped.

But not OK to say:

Let’s practice using the Rule of Three in the following phrases. I’ll say each phrase three times, and then you’ll have a chance to repeat. I’m not going to show you the phrase at first - I’m only going to say it. If you see the spelling of the words, you might try to pronounce each sound. So I want you to listen and repeat. Then you’ll see the written transcript of the phrase.

He accepts the truth.

I just went to the store.

I asked her a question.

I hope you enjoyed this video from San Diego Voice and Accent. Thanks for watching, and enjoy your day!