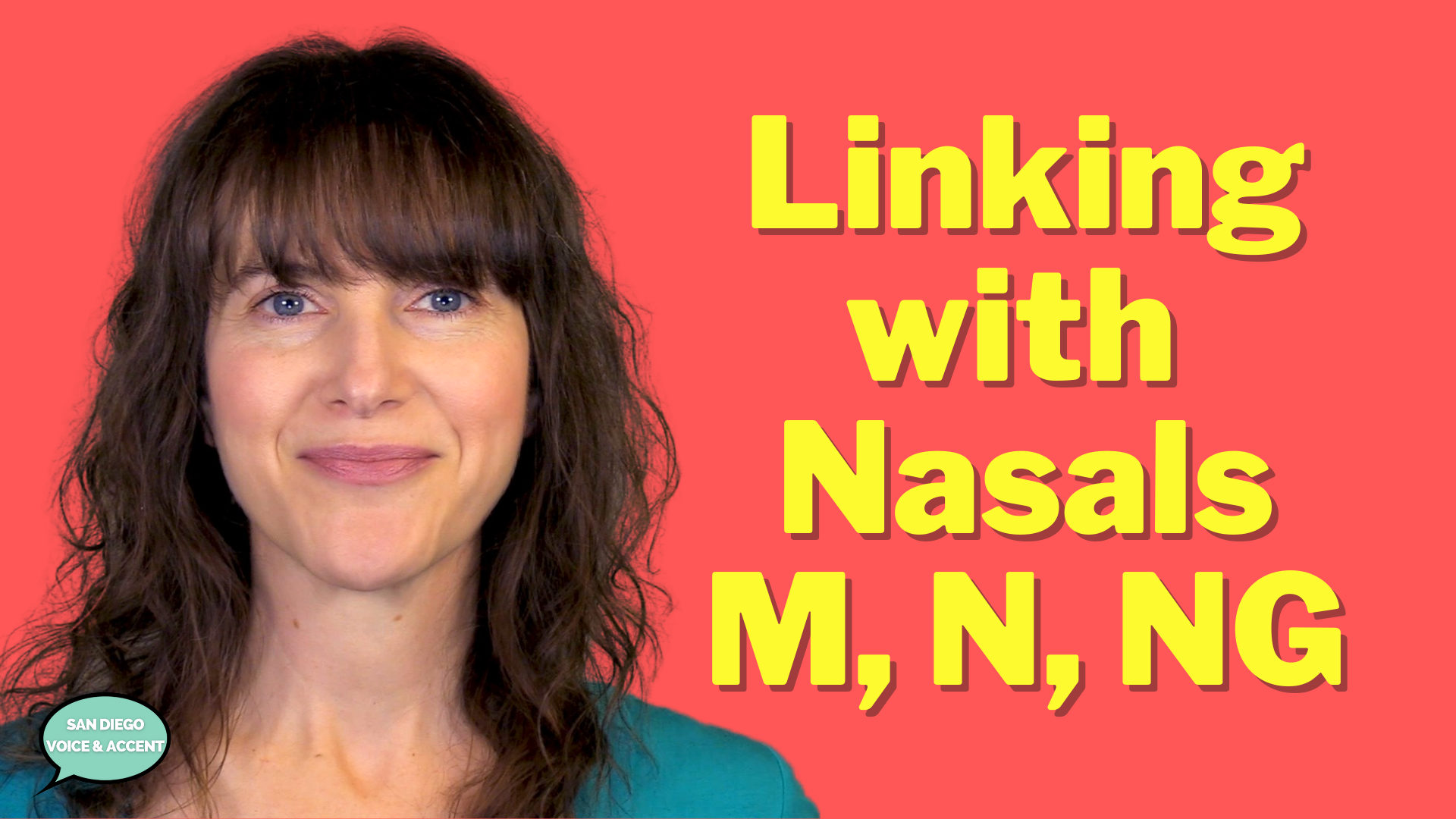 Hi, I’m Julie from San Diego Voice and Accent, and today I’m going to talk about how to link words together using the nasal consonants.

If you want to sound smooth and natural when you speak English, you need to perfect your linking skills. Linking refers to the connections between words and syllables in spoken English.

And in English, linking happens as often as it can. As soon as two words, or two syllables, come up next to each other, it’s almost like they become one big word. This helps English to sound smooth, fluid, and connected.

I’ve talked about linking in prior videos, so if you’re new to the concept of linking, please review my earlier videos so you can learn more about it.

In this video, I'm going to discuss how to link words together using the nasal consonants M, N, and NG.

The next situation is linking a word that ends with a nasal consonant to a word that begins with a consonant, such as the phrases time to go and ham sandwich.

I’m going to say the phrase in a house slowly, but I’ll maintain the linking that occurs between the words. Listen carefully to the N in the word in.

It’s almost like the N in the word in moved over to the beginning of the next word, a. Listen again:

That’s exactly what happened! The N in the word in moved over to the beginning of the next word. So the words in a sounded like one word, inna.

This also happens with the M consonant, such as:

The time is now.

The words time and is merged into one word, timeis.

The same thing happens with the NG consonant, such as:

The words sing and a merged into one word, singa.

In some American accents, like the accent spoken by some people who live in New York, a G consonant is inserted after the NG when you link that word to a vowel. So for some native speakers, the phrase sing a song might become

However, that is not the accent that I use, so I don’t add in a G sound when linking the NG consonant to a vowel.

Consonant to consonant linking in English

I can’t describe every type of consonant to consonant linking that can occur with the nasal consonants, but I’ll talk about a few of the most common linking examples.

You simply hold out the N or M so that the two words connect with one sound:

It’s not green nature with a stop between the two Ns. The words link together so they sound like one word:

When you link a nasal consonant to a different type of consonant, like in the phrase:

You simply move directly from the N to the next consonant as smoothly as possible.  In this phrase, both the final N in turn and the initial L in left are voiced consonants, so you need to continue with your vocal cord vibration as you link the words together. This will help you to smooth out the transition.

When the next word begins with a voiceless consonant, like in the phrase:

You still need to smooth out the transition between the final M in time and the initial T in to, but you don’t use vocal cord vibration to help with the transition since the T in to is voiceless.

I’ll give you an example of assimilation using a nasal consonant.

Look at this phrase.

I pronounced the N like an NG /ŋ/ consonant.

This type of assimilation doesn’t happen all of the time, but it can happen, and especially when native speakers are talking quickly.

Let’s practice a few phrases that link with the nasal consonants, and we’ll do both consonant to vowel linking and consonant to consonant linking. I’ll say the phrase three times, and then you’ll have a chance to repeat.

I hope you enjoyed this video from San Diego Voice and Accent! Thanks for watching, and have a great day!