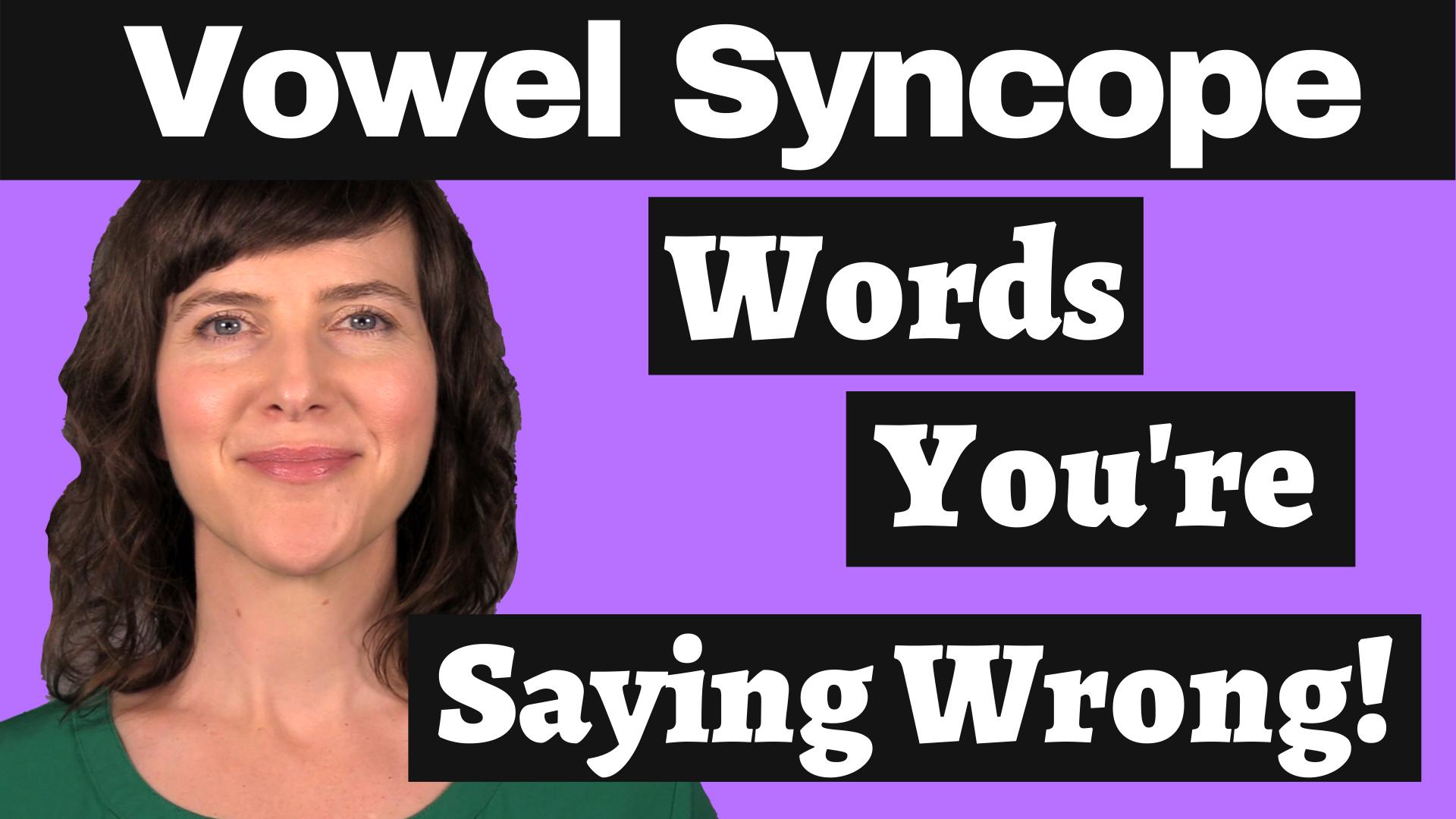 American English loves to meddle with the vowels! Vowels can be reduced, they can have multiple pronunciations, and they can be combined with other sounds. In the case of vowel syncope, the vowels are deleted completely! (Poor vowels!) Learn the most common pronunciations of "chocolate", "favorite", "interested", "difference", and "separate" - all of which contain vowel syncope in their pronunciations!

Hi, I’m Julie with San Diego Voice and Accent. And in this video, you’ll learn about vowel syncope.

Vowel sync -uh - what? I know - the word syncope is a little unusual! But here’s what it means. Vowel syncope is when a sound or syllable is deleted from the middle of a word. The spelling will show that there should be another sound there - but that sound does not occur in the pronunciation.

I’ve already discussed a few common words in American English that have vowel syncope in their pronunciations. For example, the words aspirin, average, comfortable, and vegetables all have syllables that aren’t typically pronounced. I won’t review the pronunciation of these words since I’ve done it already in prior videos, so if you want more help pronouncing these words, I recommend you watch the earlier videos in the series called Difficult Words to Pronounce in English.

In this video, I want to show you more American English words that have vowel syncope in their pronunciation. And, here’s the annoying thing about vowel syncope. Sometimes you must follow the vowel syncope pronunciation - everyone deletes that syllable, so you need to as well. And other times...well...it can go either way. I’ll point out when the pronunciation is a must, and when it’s maybe not required but it’s the way that most native speakers pronounce the word.

How to pronounce chocolate

I’ll start with a common word: chocolate. This one probably isn’t a surprise for many of you. But if you look at the spelling of this word, it looks like there should be three syllables: "chock - uh - lit".

But there isn’t - the middle vowel has been dropped, and it’s just two syllables: "chock - lit".

This one is a requirement - I’ve never heard anyone pronounce this word as "chok - uh - lit", so you should pronounce it as 2 syllables.

Here is the word chocolate up close and in slow motion.

How to pronounce favorite

Next is another common word: favorite. Let’s do a little more research on this word. Let’s first look at the IPA transcription on the Cambridge dictionary website.

The first few transcriptions show three syllables:"fave - er - it". And you have to scroll to the very bottom to see the two syllable transcription, "fave-rit". So both are shown on this website.

Hmm. Now I’m even more confused - which one is it?

There’s one more website we’ll go to - Youglish.com. Let’s hear how native speakers use this word within the context of a conversation. Of the first 10 speakers, they all said favorite as two syllables: "fave - rit".

I agree - I think favorite as two syllables is the more common pronunciation, especially when you use this word in a sentence or conversation. It’s not a requirement, but most people will pronounce it as "fave-rit".

Here is the word favorite in slow motion.

The bottom lip comes up to touch the upper teeth for the F sound. Then the jaw opens for the AY diphthong, and the bottom lip comes up to the upper teeth again for the V sound. Then you move right into the last syllable, which begins with the R consonant. The lips round for the R, and the tongue pulls back. Then you move into the IH vowel, and end on a T sound.

Next is another common word: interested. This word actually has two types of pronunciation changes that can happen. First, we’ll look at the syllable structure. If you look at the spelling, it looks like there should be 4 syllables in this word:

But, the more common pronunciation is "in-tres-tid", as three syllables.

This isn’t a requirement - sometimes native speakers will pronounce this word as 4 syllables, as in: I’m "in-ter-est-ed" in learning more about that!

But I think it’s much more common to say "in-tres-tid", in three syllables. I'm interested in learning more about that!

Here is the second pronunciation change that can occur with this word. Sometimes when the letters N and T are next to each other, and the T begins a weak syllable, like in interested, native speakers might drop the T sound completely and say,

"innerested". The first T is gone.

But what happened to the syllable count when I used that pronunciation?

The syllables went up to 4!

Again, the more common pronunciation is interested as 3 syllables, and that first T sound is pronounced. But I wanted to share the other pronunciations with you in case you hear them in your studies.

Let’s see the word interested up close and in slow motion.

How to pronounce difference

The next word is difference. I just pronounced this word as two syllables.

Cambridge dictionary transcribes difference as having three syllables in its first transcription, and later on it shows it has two syllables. Confusing!

Let’s quickly go to Youglish.com to see how native speakers pronounce this word in a conversation. Of the first 10 speakers, all of them pronounce it as two syllables: "diff - rinse". And I agree - this is the more common pronunciation.

It’s not a requirement - you may on occasion hear a native speaker pronounce this word as 3 syllables, "diff-er-ence", but the much more common pronunciation is "diff-rinse" - 2 syllables.

How to pronounce separate

The final word we’ll discuss today is the word separate. This word can be both an adjective and a verb. I’ll use it in a sentence.

Here’s the adjective: The manager lives in a separate building. I pronounced the adjective as two syllables: "sep-rit".

Here’s the verb: You need to separate them into two groups. I pronounced the verb as three syllables: "sep-er-ate".

Let’s focus on the adjective pronunciation, since that is the one that can have vowel syncope.

Let’s first look at the Cambridge dictionary website. It shows separate as three syllables in its transcriptions of the adjective form, then at the very bottom it shows it as two syllables, but with a small schwa sound between them. That’s confusing!

So let’s listen on Youglish.com - how do native speakers pronounce this word in a conversation? "Sep-rit" or "sep-er-it"?

Of the first 10 speakers who used separate as an adjective, they all pronounced it as two syllables, "sep-rit".

This word begins with the S consonant, then the jaw opens for the EH vowel. The lips close for the P sound, then round for the R consonant. The lips relax for the IH vowel, then the tongue tip comes up to the alveolar ridge for the final T sound.

I hope this video helped you to learn more about vowel syncope in American English! Thanks for watching, and let me know how I can help you with your English pronunciation!