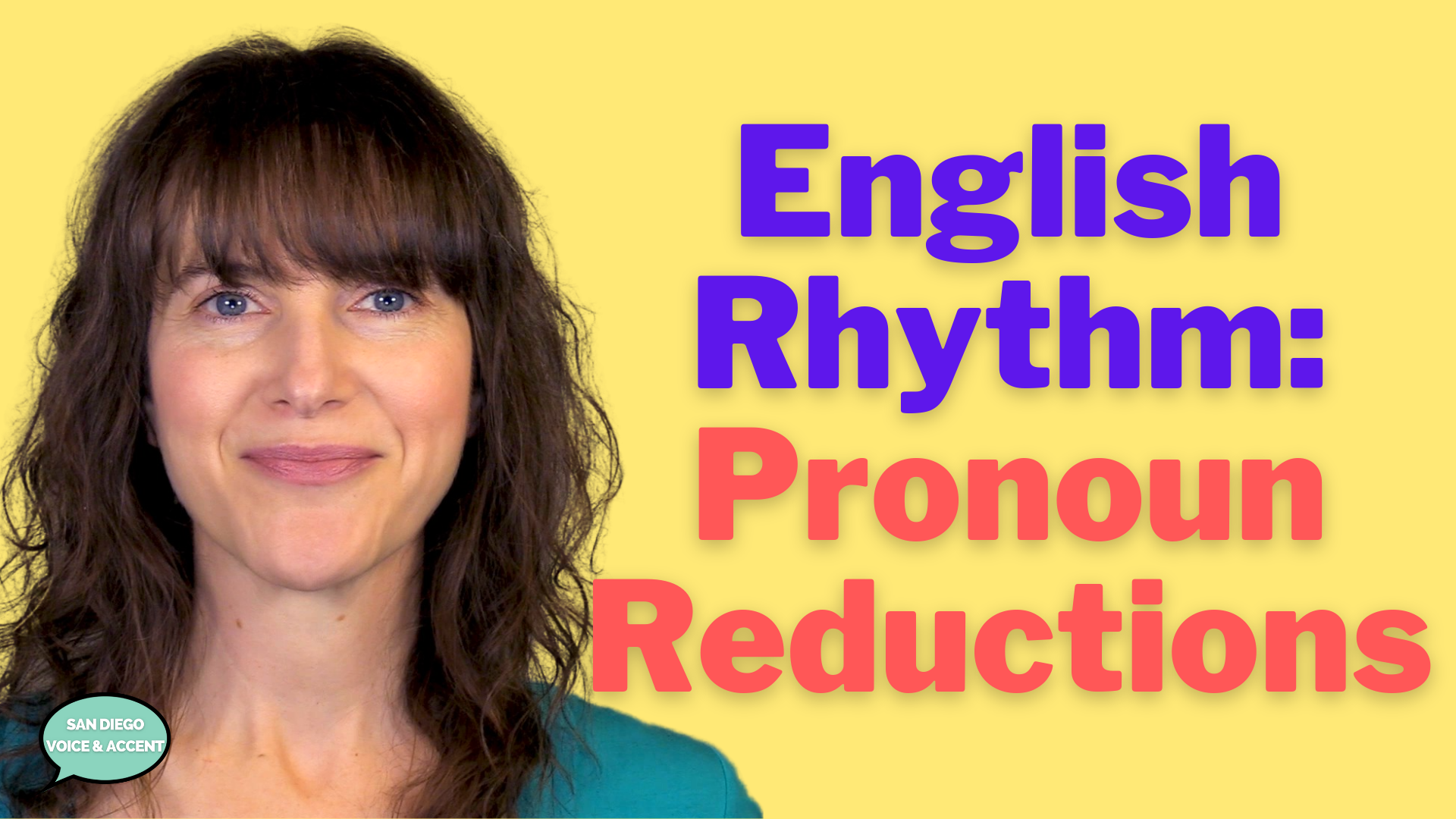 Hi, I’m Julie with San Diego Voice and Accent, and today you’re going to learn how to improve the rhythm of your English with pronoun reductions!

It is no secret - spoken English can be much different from written English. As soon as a word is spoken out loud, things can change about the pronunciation - vowels can be reduced, two consonants can merge into a totally different consonant, and sometimes a sound is deleted completely.

And you may be thinking: why does this happen? Why do native speakers change the rules to pronunciation when they speak? Well, there’s a good reason. When you delete a sound from a word or reduce a vowel, it makes that word easier to say.

I want to talk about a very common word reduction that native speakers use all of the time, and if you learn this rule, your spoken English will instantly sound much more connected and have a better rhythm.

I’m going to play a short video. The speaker in the video says this sentence.

“And he had to drive into work - it took him a while.”

She uses a couple of vowel reductions in this sentence, but I want you to focus on the word “him” in the phrase “it took him a while.”

What happened to the word “him”? Did you hear any type of reduction? I’ll play it again.

Instead of saying the word “him”, she said the word “um”. Um.

Pronouns that begin with H and sometimes TH, like the words him, her, them, and he, are often reduced in spoken English, especially when they are unstressed. Native speakers will delete the initial H or TH consonants, and then sometimes the vowel is also reduced.

Let’s look again at the example in the video. The speaker said “it took him a while.”

She reduced the word “him” to “um” by deleting the initial /h/ consonant and reducing the vowel to the schwa, and then she linked the words “took” and “um” together like “too-kum”.

Pronoun reductions are common, and it’s not just the reduction that’s happening - you also have to consider the linking that occurs.

If you don’t reduce the word “him” in the phrase “took him”, then you’ll have two consonants linking up to each other, the final K in took and the initial H in him.

But when you reduce “him” to “um”, you have a consonant linking up with a vowel, and it’s almost like the final K in took moves over to the beginning of the next word “um”.

Can you hear the difference in the rhythm between the two phrases:

The phrase with the reduced pronoun sounds much more smooth and connected.

Let’s look at another pronoun reduction. Watch this next video.

What happened to the word “them”? Did you hear any reductions? I’ll play it again.

Instead of saying the word “them”, the speaker said “um”. Um.

This is the same process as what happened with the word “him”. The initial TH in “them” was deleted, and the speaker also reduced the vowel to the schwa. Then he linked the words took and “Um” together like “too-kum”.

There are two additional pieces of information I want to add to this discussion so far. First, in these examples pronoun reductions, the words “him” and “them” both reduced to the word “um”. Your listener will know which pronoun you said based on the context of the conversation.

And second, when a pronoun begins a sentence or phrase, such as “He is tired”, the initial H in “he” is never deleted.

Now let’s practice pronoun reductions, and we’ll start with the pronoun “him”. I’ll say each sentence three times, and then you’ll have a chance to repeat.

I told him not to go.

Is her family staying with her?

I showed them what to do.

Will he meet us at the restaurant?

I hope this video helps your English rhythm! Thanks for watching, and have a great day!