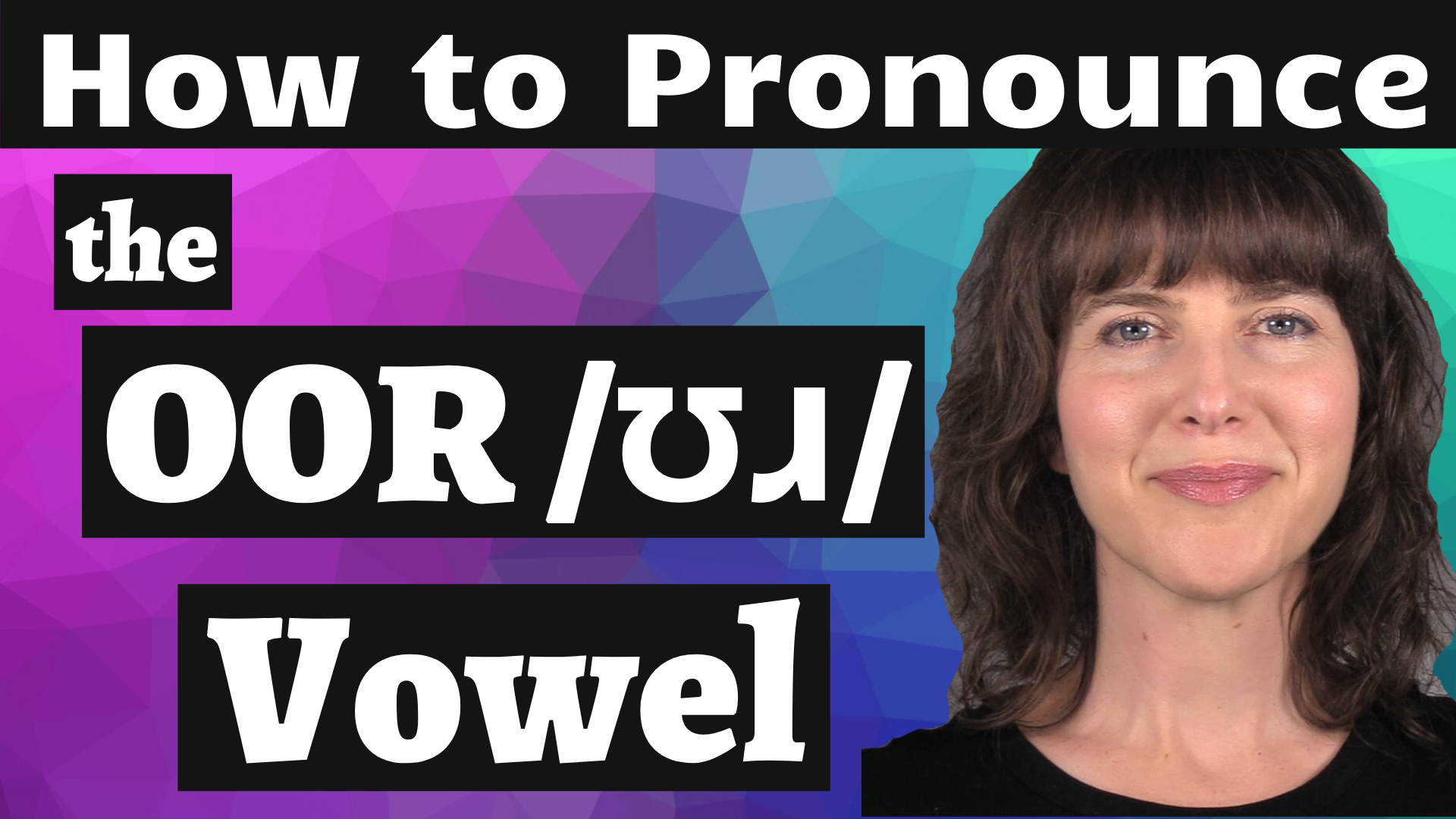 How to Pronounce the OOR /ʊɹ/ Vowel

The American English OOR /ʊɹ/ vowel is a lesser-known R-colored vowel. It's in the words "tour", "lure", and sometimes in the word "you're". This vowel is different than the other R-colored vowels because not all native speakers use this vowel - sometimes they use the OR /ɔɹ/ or ER /ɝ/ vowels instead! Watch to learn some pronunciation tips about this R-colored vowel, close up and in slow motion!

The OOR /ʊɹ/ vowel is in the words tour, lure, and sometimes in the word you’re. OOR. I just described the OOR sound as a vowel, and there’s an R in that sound. Isn’t the R a consonant?  Yes, but the R sound can function as a vowel depending on where it occurs in the word. When the R sound comes after a vowel in the same syllable, it is considered to be a vowel in that word. I discussed this concept in a previous video called the Introduction to R-Colored Vowels, and if you want more background information about the R-colored vowels, I recommend that you watch that video first.

When you say, OOR, you should feel movement in your lips, tongue and jaw. OOR. Because the OOR vowel is made up of two sounds: the UH /ʊ/ like in book vowel, and the R sound /ɹ/. OOOORRRR. OOR.

Let’s take a closer look at the OOR vowel by itself and in the word tour.

How to make the OOR vowel

To make the OOR vowel, the tongue is high in the mouth and pulled back slightly. The tongue tip is down, behind the bottom front teeth. The jaw is closed, and the lips are rounded and pushed away from the teeth. Then as you progress to the R sound, the tongue pulls back and the sides of the tongue push against the inside of the upper back teeth or along the upper gum line. The lips relax slightly, but they remain in a pursed position, or pushed away from the teeth. The jaw drops down slightly.

Now you’ll see OOR in the word tour. At the beginning of the vowel, the tongue is high and back in the mouth, with the tongue tip down. The lips are rounded and are pushed away from the teeth. Then as you progress to the R sound, the tongue pulls up and back and pushes against the inside of the upper back teeth. The lips relax slightly, but remain pursed.

The OOR vowel is a little different than the other R-colored vowels. Not all native speakers use the OOR vowel...at least, not in the words that the dictionary says uses the OOR vowel. So there is more flexibility with how these words are pronounced. Let’s take a quick look at a couple of examples.

How to pronounce tour

How to pronounce you're

Now let’s look at the word you’re, the contraction for you are. This particular word can be pronounced as you’re, using the OOR vowel, you’re, using the OR /ɔɹ/ vowel, or yer, using the unstressed ER /ɚ/ vowel. I think the more common pronunciation is you’re using the OR /ɔɹ/ vowel, and that is how I pronounce this word. You’re. And if you’re is reduced, like it is in this sentence, “I think you’re right!”, then native speakers use the ER /ɚ/ vowel, so it sounds like yer. ER. Yer.

These examples show that there is a lot of variability with how native speakers pronounce words that are transcribed with the OOR vowel. Personally, I pronounce these words as tour, tourist, lure, you’re or yer, and Europe.

Here are some practice words and sentences using the OOR R-colored vowel.

Let’s take a tour of the city!

This restaurant is a tourist-trap - let’s get out of here!

The company hoped to lure in customers with its annual sale.

Thanks so much for watching! And let me know how I can help you with the OOR vowel!