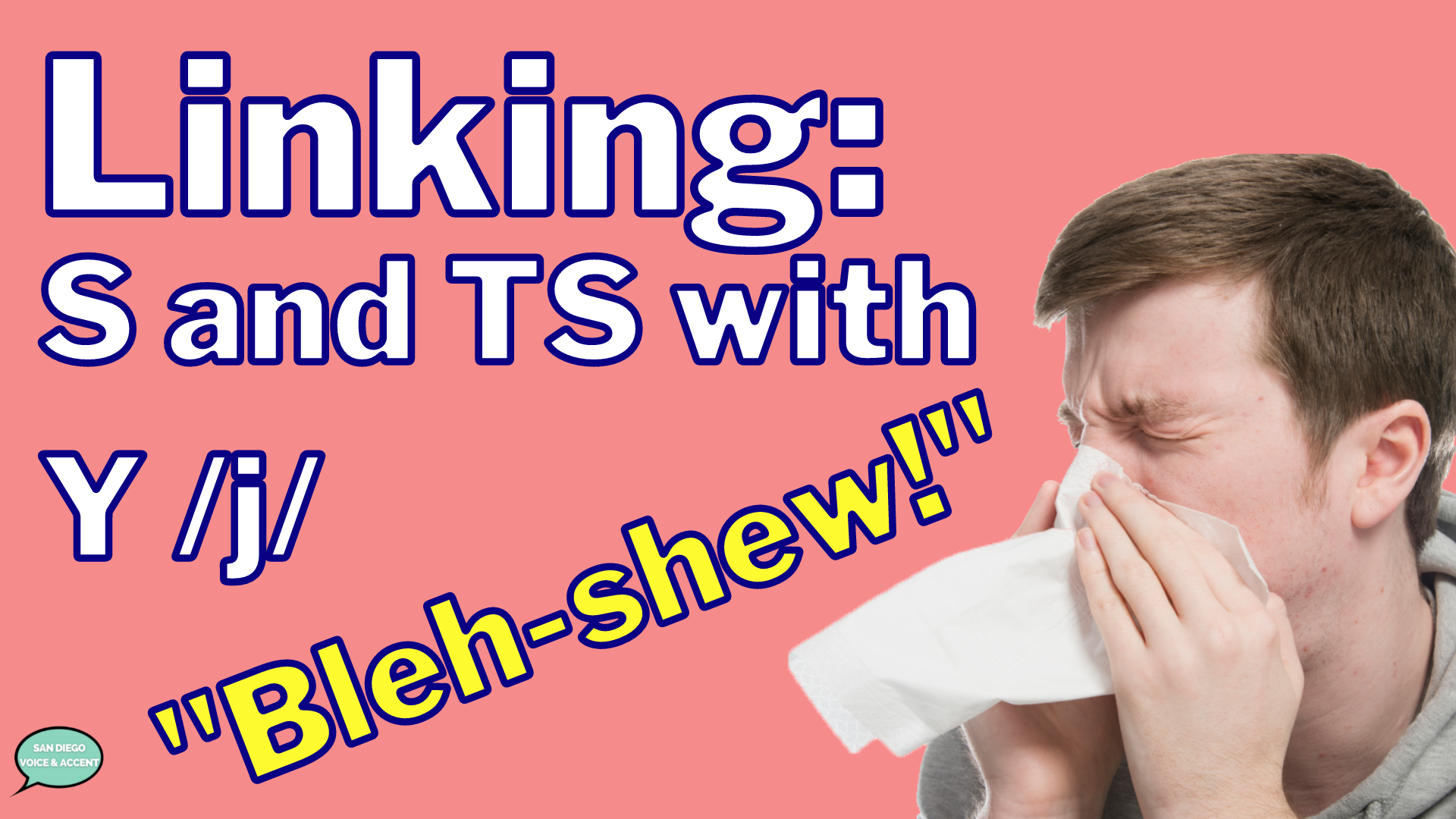 Wait, what did he say? Did he say hates you or hay-chew?

He said hay-chew! Hmm, is that correct English?

Hi, I’m Julie with San Diego Voice and Accent, and in this video you’ll learn all about this special type of linking called assimilation.

Linking in connected speech is what makes you sound smooth and fluent when you speak. And there’s no way around it: if you want to speak clear and natural English, you need to master the art of linking your words and syllables together.

In this video, you’ll learn about one special type of linking that can occur between two consonants. And we’re going to get pretty advanced here, so if you want to learn all the details about what is actually happening with your articulators when you link consonants together, then continue with the video. But if you want to skip directly to the practice, you can find that in the chapter feature below.

And speaking of practice, this is a good time to mention that this video is sponsored by Julie’s Conversation Club, which is my live English class that I hold every week. If you join the Convo Club and come to a live meeting, I’d be happy to work with you individually on your pronunciation and give you feedback on how you sound. So join my next class, and I can help you with your linking skills. Look in the description for details on how to join.

Linking and assimilation in American English

I’ll begin our advanced discussion on linking by talking about assimilation. Assimilation describes what can happen when two consonants come up next to each other, either within a word or when linking words together. When assimilation occurs in speech, this means that at least one of the sounds has changed to become more similar to the other sound. You actually change the pronunciation features of one of the sounds so that it can be more similar to the neighboring sound, or in other words, the sounds assimilate to become more alike.

This type of linking can occur in the phrase bless you. In fast speech, native speakers may pronounce this as blesshou, not bless you. They might link the two words together with the SH consonant, and in this example, you’ll notice that the S in bless and the Y in you are replaced by the SH. You don’t pronounce the S or the Y - it’s just the SH sound.

This type of linking can occur in the sentence it’s your birthday. In fast speech, native speakers may pronounce this as it’chour birthday, or they may reduce it even more to it'cher birthday.

You may be wondering: Why? Why does this happen? Why is a completely new sound created when you link these words together? This type of assimilation has a special name. It’s called palatalization. Ok, so that’s a huge word to describe what’s going on, so let’s break it down. Palatalization comes from the word palate, which is the name of the roof of the mouth. You have the hard palate at the front and middle of the roof of the mouth, and the soft palate at the back. I'll show you some pictures of the inside of the mouth so you can see what I’m talking about.

But when palatalization of the S consonant occurs, the tongue actually moves farther back, towards the palate, to make the S consonant. This location is called post-alveolar, which means behind the alveolar ridge.

And when the tongue moves back for the S consonant, the SH sound is naturally created.

Let’s look at the rules of assimilation again, and this time I’ll use the pictures to help describe what’s happening:

The S ending plus the Y /j/ consonant creates the SH sound. You can see in these pictures that the tongue placement of the SH sound is in between the S and the Y consonant. This is how assimilation works: The Y sound influences the S consonant and pulls it farther back in the mouth.

So let’s pause right here. If that part of the video was confusing, go back and watch it again to make sure that this process of palatalization makes sense to you, because it will help you when you do the linking practice.

So, why am I discussing this specific type of assimilation? Because it’s common in spoken English! The S ending is common in many English words, and it’s common to link a word ending in S with words that begin with the Y /j/ consonant, especially pronouns like you and your. So it’s common for native speakers to use this type of assimilation in their speech, and if you can learn how to use it, you’ll be able to link words together much more effectively.

This year is going by so fast.

He hates your cooking.

The alarm gets you up in the morning.

Thanks so much for joining me for this advanced lesson on linking, assimilation, and palatalization. I hope it was useful! And I’d love to help you with this type of linking, so look below for information about how to work with me at my next live English class at Julie’s Conversation Club. Have a great day!