The Top 5 Problematic Sounds in American English: The "t" Sound

Let’s talk about how to produce a few specific sounds in English. Since your native language may differ from another person reading this blog, these sounds may or may not be challenging for you. But based on my experience with accent modification, most people have difficulties with these same 5 sounds, regardless of their native language. I’ll begin this series with the first sound, “t”.

You may be thinking, “The “t” sound? That one is easy!” But hear me out: There are three ways that Americans pronounce this sound. (I know - three ways?) It may take you awhile to perfect all three pronunciations of the “t” sound, and that’s OK! The goal is to increase your awareness of the sounds so that you begin to hear them when you listen to native American English speakers talking. Once the awareness is there, you’ll be able to use them!

The first way to make a “t” is probably the way that most of you learned it: Your tongue tip comes up to the roof of your mouth, just behind your front teeth. You build up some air behind your tongue, and then you quickly puff the air out (called aspiration). This “t” sounds sharp and clear. 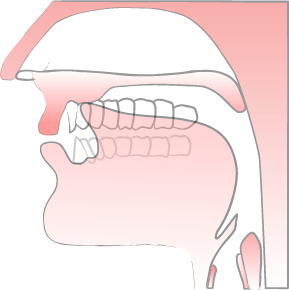 You use a flap /ɾ/ when a “t” occurs in the middle of a word and between vowels, like in the words “butter”, “Italy”, and “water”. This is also a type of pronunciation that makes Americans sound different from English speakers in the U.K. Americans use a flap /ɾ/ in “water”, but British people use an aspirated /t/.

The third way an American English speaker pronounces “t” is when it occurs at the end of a word, like in “hat” or “hit”. In this case, the “t” can be pronounced either as an aspirated /t/ (like in the first example) or as a glottal stop. The IPA symbol for a glottal stop is /ʔ/.

When you use a glottal stop /ʔ/ for a “t”, your vocal cords come together to stop the flow of air, and they remain closed. This type of “t” is not aspirated - there is no puff of air that comes out behind it. Your tongue tip also does not come up to the roof of your mouth; in fact, your tongue does not really participate in making a glottal stop /ʔ/. Your tongue tip stays low in your mouth and may rest behind your bottom front teeth.

Try it out yourself by saying “ah-ah-ah-ah-ah” in a short, staccato manner. You should be using a glottal stop to pulse out that sound. Now try to use that same glottal stop with the word “hat” - close your vocal cords as you finish the word; no tongue tip, no aspiration, no puff of air.

Let me know if you have any questions or want additional help with the American “t”! And stay tuned for upcoming blogs about the next 4 problematic sounds in American English.